The ant and the universe

Believe it or not, these facts are easy to understand with only elementary knowledge of cosmology.

There is a classic puzzle involving an ant on a rubber band.  The ant tries to run from one end of the rubber band to the other, but every second we stretch the rubber band longer.  Will the ant ever reach the other side, or will it just get further and further from its destination as the rubber band stretches?

(Note that the far away galaxies aren't breaking any speed limit even if they recede faster than light.  They are receding because the space between us is expanding.  The relativistic speed limit only applies to the relative velocities of two objects at nearly the same location.  Analogously, we can say that even if we stretch the rubber band really fast, this doesn't mean the ant is breaking its own crawling-speed limit.  It just means the rubber band is stretching.)

The series in parentheses is known as the harmonic series.  The harmonic series can arbitrarily big, just by adding more terms (but it takes an exponentially large number of terms).  If we were to graph the ant's trajectory, it would look like this: 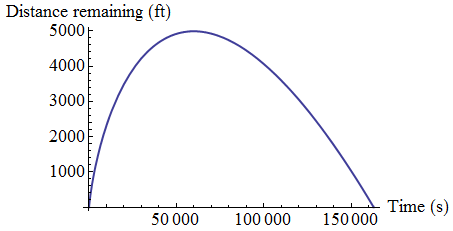